Think of a situation as an adult when you felt afraid,
yet chose to face your fear. 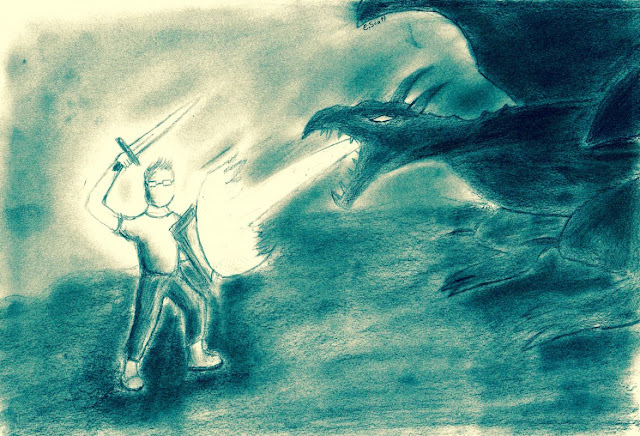 I have a habit of engaging people I don't know. Weird. I’m far from being an extrovert. Just the opposite. As an Enneagram four with a five wing I’m more of a deep-thinker with a desire for personal autonomy and self-expression. Regardless, Tony was sitting next to me at the auto repair shop. We got to chatting and I asked his opinion about a sermon I was writing on courage. He shared his definition of courage with me: “The bravery to do something you know you ought to do” How would you define courage?

Courage, it’s an interesting thing. Courage isn’t something you ‘have’ or even what you ‘are.’ It’s what you choose to practice. Courage doesn’t always look just like bravery and fearlessness. It often looks like sweaty palms, wobbling knees and a quavering voice. It can look like second guessing yourself, battling anxiety and feeling the overwhelming urge to hide back in the shadows. I think a lot of people believe courageous people do 'big stuff', and my life is so ordinary.
Dealing with a new medical diagnosis, that takes bravery; Being confronted with a changing family dynamic - courageous; Coming out, heroic. Maybe courage looks like the war-ravaged elderly couple who hid Jewish family in Nazi occupied Europe.

Ananias from Acts Chapter 9 was clearly an example of bravery & courage, of guts and grittiness. “… Now there was a believer in Damascus named Ananias. The Lord spoke to him … “Ananias!” … “Yes, Lord!” he replied … The Lord said, “Go over to Straight Street to the house of Judas … With sweaty palms, wobbling knees and a quavering voice, Ananias exclaimed,  “But Lord,” … The Lord said, “Go, for Saul is my chosen instrument … So Ananias went and found Saul. He laid his hands on him and said, “Brother Saul …”
Saul of Tarsus (the Apostle Paul) had authority to arrest and kill ppl like Ananias, believers in the Way. I’m totally moved by a minor figure in scriptures, like Ananias of Damascus, Syria. I believe he's a great example of courage as summarized by Nelson Mandela: “…courage [is] not the absence of fear, but the triumph over it. The brave man is not he who does not feel afraid, but he who conquers that fear."

Whatever you do you need courage. It’s the capacity that allows us to take risks; make sacrifices; it helps us withstand and to grow.  Courage as Martin Luther King said: [is] “dangerously unselfish.” Go with God, friends. Be strong and courageous — be strong and very courageous…
#Pkes #Ministry in Motion